A nested object is like a Matryoshka doll where one object placed inside another and you can choose to not open the next level — a perfect usecase to demonstrate the power of GraphQL.

In this post we’ll see how nested objects can be read from GraphQL server and how the mapping works here. For this purpose, I’m bringing in a new entity — called Account. For any expense or income, an account will be mapped to it. It is a Many (Expense)s to One (Account) mapping. This opens possibilities to few queries that involve both entities.

We’ll focus on the first one. Enough with the introduction, let’s jump to the coding part.

Our account entity is a simple model which has three fields as in below block.

Complete Account Entity, Schema and Fetcher changes are present in this single commit. Since we already covered CRUD on single entity, I’m fast-forwarding here. I left some sample queries on Account entity to play in GraphiQL (http://localhost:8080/graphiql).

So far our account and expense entities don’t know each other. Let’s introduce them. We have three stages in it, I made separate commits for each stage.

Before linking the entities let’s understand how both of them are connected. In this case, given an expense it is connected to an account. For any account, there could be multiple expenses. That means a many-to-one relationship. By convension we represent this as a foreign key in Expense table.

Same can be represented in our expense entity as follows.

If you’ve noticed, the acNumber is a non-nullable int field in expense. That means we have to ensure the same on Expense creation part. So our expense input and schema gets few changes as well.

We can reflect the same in create query, and include the acNumber to create an expense with mapping. That’s about the creation part — now all the new expenses will be linked to an account. Note that, we haven’t added any validation whether the account is present in the accounts list. Our focus is on read part, above creation flow is un-avoidable.

Try the above mutation in GraphiQL to create expense. Next part is fetching it.

Though, the object is represented as FK in our entity, what client really need is a fat-object that includes account in it. So, let’s start edit the schema and bubble up the changes to the fetcher.

We’ve added the account field in expense, but the fetcher doesn’t know it yet. It still returns the expense entity which has acNumber as forign key. To expand the same, create an intermediatery object that can directly map to the schema — lack of names calling it a FatExpense. This replaces the FK with actual object.

Next, in the fetcher make changes to intialize the account field. This involves querying the accounts list per expense. So, the DAO — and fetcher changed as follows.

This should do it, head over to the GraphiQL and run a nested query. A simple query & response will look like this.

Nice! Is it over yet? No Let’s say I need only the amount and remark in my list. Following query should get it to me.

It still works as expected. What’s wrong with it? Checking the network logs, we can find the SimpleExpense query still probes the accounts list even though we havn’t mentioned it in the selection [fields that we request from client]. This is bad for resource consumption. How do we fix it? Is GraphQL/DGS equipped with anything to help with it?

DGS can tell a fetcher what are all the fields that is present in the request. Same is available in the form of special parameter called DgsDataFetchingEnvironment. After adding it to our query and debug the paramter for selection, I found the selection three levels down.

selections is a tree like structure that will expand as query’s depth. For this use-case, we’re checking the field name account. Refer below screenshot for how selection is structured. 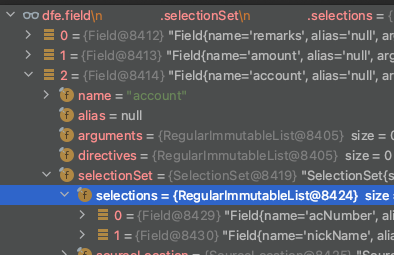 Now we know when to query for account, to implement it in fetcher FatExpense#account is made nullable — var, and on-demand assigned inside fetcher.

Same query from above section won’t invoke account query now. This is a first level of optimization over the nested graph — Nodes are fetched on-demand. However, there is still room for improvement. Look at the NestedExpense usecase, we’re fetching the Account… that’s expected. Problem is we’re fetching the same account for multiple accounts. Spoiler alert — modern dbs caching this kind of query results to mitigate the performance impact. That doesn’t mean we should code it this way.

In this post, I’ll cover how to create a simple GraphQL server with Springboot and Netflix DGS. DGS is chosen because you start with GraphQL schema and then build server side logic around it. P...

In the first installment, I covered create and read operations to the Expense entity. Now let’s add few more operations ⇨ update and delete queries. Entire source code is available in github. For ...

In the previous post, I created a FatExpense object and added manual checks to avoid fetching Account entity. If we’re scanning the selection manually and write our own check, what’s the role of Gr...