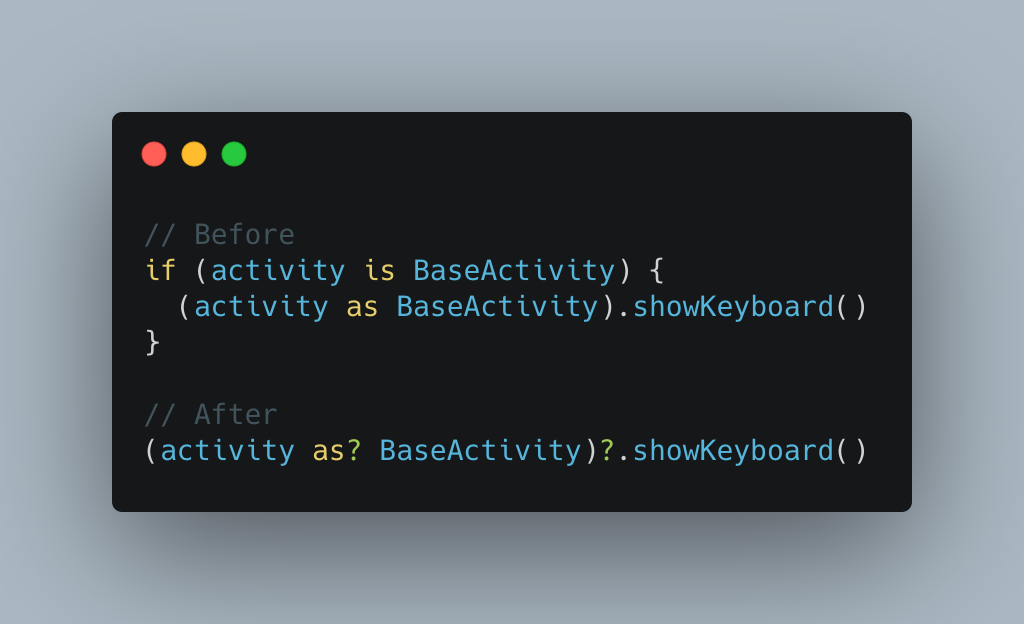 In multiple cases you might’ve came across the situation where you have to cast a global variable and check the instance beforehand.

A most common case in Android environment is to check whether the (hosting) activity implements a callback or extended from Specific one.

From the official doc

Use the safe cast operator as? that returns null on failure.

How this is better?

In surface it might not look like a better code overhaul. As calls to activity increase in numbers, it gets better.

We could easily cast the activity to the exact subclass and invoke both methods.

But it enforces the CreateTweetFragment to be attached to the TwitterActivity to execute both statements. Anything that is just a BaseActivity or TweetSubmittedCallback won’t execute the statement even though the implementation is in place.

Now with the as? operator, both statements can be executed independent of each other.

Why should I go for compose?

Way less boilerplate and better tooling. That’s why. What’s wrong with the old widgets? The old Android widget is painstakingly (smart!?) enough to has its own state and it is not necessarily i...

Get productive with GraphQL — Type Adapters

One of the demanding features in any serializer-deserializer is the ability to convert data to user defined format. GraphQL is smart enough to generate classes & parsers for your primitive / ne...

LiveTemplate is a feature in Intellij based IDEs where you can expand a code snippet by typing an abbreviation and the IDE guide your cursor through the parts that need your attention (a variable n...